So, let's all take a moment to acknowledge that yes, I took a short hiatus from this project. In fact, the last time I posted swatches from Karen Hemingway's Super Stitches Knitting stitch dictionary was in March of 2012. There were a few things that contributed to me ceasing swatching:

1. I had gone in with the idea that I'd use the same yarn and needles for each swatch so I could make a blanket, and a lot of the patterns just didn't look great at the gauge I was forcing myself to work at
2. Some stitches would have looked much nicer in another fiber. I chose wool because I thought it would make everything look good but it really just didn't. Especially since I was using cheap wool.
3. I self-imposed color restrictions, enabling only neutral natural colors and that frankly got boring
4. I started dreading sewing it all together and then once I began the process I dreaded it even more
5. I was nearing the edging section and I didn't know how to incorporate that into the blanket
6. The book does have errors, and if there is am errata/corrections page I've yet to find it.
7. It was frustrating trying to Google videos for how to perform some of these stitches when the author named a lot of them in a wildly different way than the stitches are commonly known.

So I took a few years off. Actually, I quit. I let it die quietly and never gave it another nod. But in my head, I still liked the idea of knitting through a stitch dictionary. I still felt like the project hadn't been completed, and perhaps it never will be in the way I first imagined, but it can be continued.

Gone are the restrictions, any and all. Gone is the thought that I must knit each and every swatch even the ones I already know and the plain edgings or any edging for that matter. With the freedom to use any yarn and any color or fiber in my stash I think it can be exciting again. With the freedom to fail at a swatch, to knit and frog it several times and decide it's OK to just skip that one this time and scrawl a big curse word on the page to warn any of my grandkids against knitting it.

So, without further ado, the stitches I worked this week were:
Ripple Stitch
Double Trellis pattern
Cross stitch 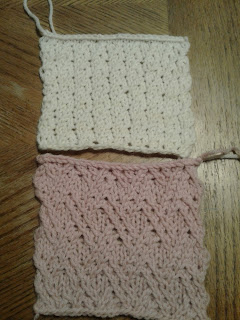 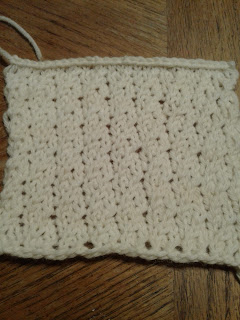 I have to say this one was  my favorite this week. It is a multiple of 3 stitches, and only has 4 repeats so it's already am easy stitch. Every wrong side row is a purl row so that's easy. It's simple to tell where you are in the pattern. And it looks really beautiful. It's squishy, it has stretch, and it looks a lot more complicated than it is- one of my favorite qualities in a stitch pattern. 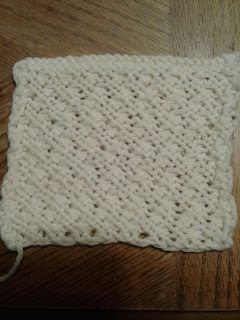 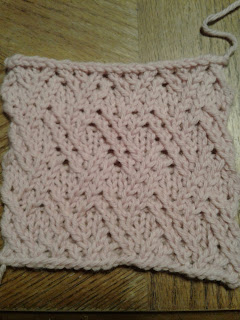 I did not enjoy making this swatch. I did an entire repeat of the pattern working the "RT2L" incorrectly. (Don't bother go ogling that term for a video I think the author makes up terminology at will. The other stitch used in this pattern, "RT2R" was used in the previous pattern with absolutely no reference to it having a name, she just explained how to do it in each row it appeared.) I was knitting the second stitch through the back loop bringing my needle in from the front of the work, when I should have been knitting it through the back loop working from behind the work. I realize that makes little sense but on the off chance someone is looking for help with this one maybe that can help. Because I did 12 rows incorrectly before I thought, look this really looks nothing like the photo how ELSE can I approach this? Once I figured that out, though, it came along quickly and looks truly adorable. I did use pink yarn on this swatch so that could be affecting my judgement. 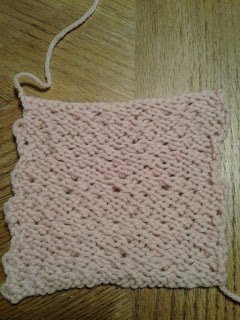 But seriously it is a charming stitch pattern. It gives off a nice weaving in and out effect and looks very clever. I think a hat in this stitch would be nice, if one worked out proper decreasing in pattern. I think wristwarmers would look nice too but it's kind of a gappy pattern as far as warmth goes. It's also not incredibly stretchy. Overall, it's an OK pattern. It's a 12 row repeat but purl rows are plain so that's good for me. 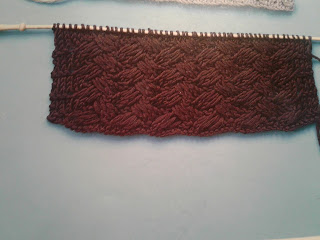 Don't Google "cross stitch" and expect to find this. There's apparently criss cross stitch, Indian cross stitch, and quilted cross stitch and none of them are this. I found exactly one reference to this stitch from this book on an old Ravelry forum and according to that poster the stitch is doable but I cast on and frogged after row 4 three times before I felt my blood pressure rising and thought man I am doing this for fun not for fury, and I put it down!! For an hour and then gave it one more go... but this swatch defeated me. 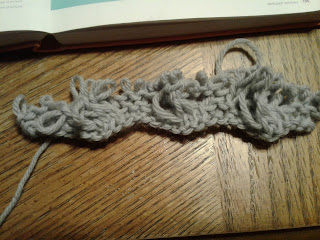 I'm still not sure how to execute the special stitch it requires and it seems like using a cable needle would simplify things and at row 4 suddenly the repeat is off. Googling for errata proved useless but I did find a review on goodreads where a user mentioned that some stitch patterns just seem to falter and then not line up anymore so... honestly I'd attribute it to that except for the photo and that one ravelry user prove that at least someone made this stitch at one point! It's frustrating for me to come to a pattern I can't knit. The one thing I think I'm good at-knitting- and it beats me! But, rather than stress about it and allow it to consume my life I will just let it be, Mark it on the page as incomplete (OK I put a few other choice words) and move on next week to....

Posted by grandmastatus at 10:24 PM