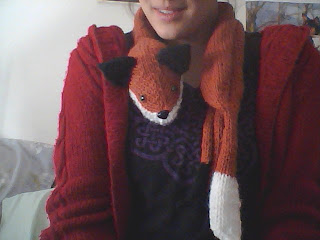 Pattern: Mr Fox Stole (my heart) by Stephanie Dosen (aka Tiny Owl Knits)
Materials:
MC: Knit One Crochet Too's Camelino
CC1: Lion Brand Jiffy (This is kind of fluffy for his chin and tail)
CC2: Lion Brand Wool-Ease
Safety eyes and nose
Notes:
This pattern was much easier than I had thought. Instead of being worked on DPN's, the face is knit flat and then sewn together. In fact, you only need DPN's for the ears and to work the I-cord legs.
The seaming was much easier than I had expected and once he was all done I just wanted to give him a big hug.

I bought his plastic eyes and nose at Jo-Ann's. They were very easy to put on, but because they aren't attached with thread I wasn't able to make the eyes "sink in" as much as the pattern suggested.

Oh, and don't forget, the lovely ms Dosen has just come out with a new pattern and it is free. See here for pattern and knit-a-long!
Posted by grandmastatus at 1:10 PM