Going offline a while..

We changed our phone number so the internet will be out all weekend.
Not sure how I'll be able to live without Ravelry!
Also, Vyvyan has Roseola. The fever was pretty bad, it got to 104.7, but now he's fine and just has a rash all over his body. Apparently, the rash doesn't hurt or itch so he's acting perfectly normal.

I did make a bit of progress on my fingerless mitts... 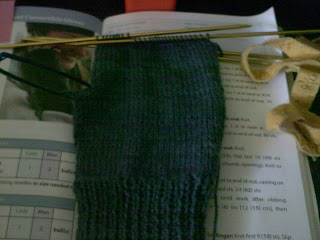 And then once it got to the scary part (adding the fingers) I put it away and nearly finished the mitts I started a long time ago. I just have to weave in the ends and sew on a button and then I have a pretty christmas present for a friend. I'll post a picture of that later.

In the meantime I started a new project.
The pattern is from the new Knitty and can be found here.
I think I made a bad yarn choice though, because the multi-color is obscuring the cable pattern....
We'll see. 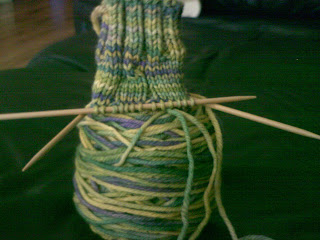 Oh, also I wanted to share the loot I got from Jo Annes yesterday. 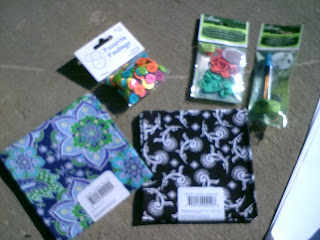 1) Many cute multicolor buttongs
2) Locking stitch markers (always need more)
3) Clover darning needles along with little case (I had one of these but it's gone missing....hopefully I'll find it and then have two)
4) Fabric!!!! (I don't know how to sew, but I'm going to attempt to learn because I want a tea wallet so bad.
5) I also couldn't resist this adorable bag for 1.99 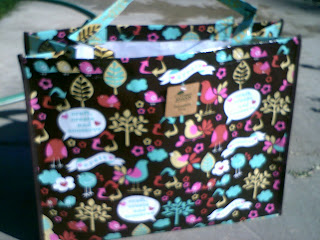 So anyways, I'll be back once we have internet again. I'll try to at least upload my super stitches project on sunday, but I don't have a car so it depends on if someone wants to take me to Wifi.
Happy knitting.
Posted by grandmastatus at 11:01 AM