Belated Happy New Year and Bloggity Bloggity Boo, Plus some lists no one cares about

Alright, so I haven't blogged in a while. Not like anybody's reading! Maybe I'm just a little defensive because I lost the cord to my digital camera and I think blogs are boring without pictures.
Because honestly? I have some awesome things to show off.
My cable car coat for example which is D-O-N-E done. And, except for the sloppy sewing job on the buttons and the fact that I should have made one last button hole, it looks pretty good! You can't even tell that I had to knit 5 sleeves before I came to a pair I could settle with. Well, you can if I hold my arms out but people don't go walking around shaped like a T. Especially if they know that every time their arms stick straight out the underarms of their sweater pooch out like weird balloons.
Just makes me think of Elizabeth Zimmerman: "your sweater will be puckery and unpopular."
But substitute "armpit pouched" for "puckery."

Luckily I can ignore the issues I had with the sweater because 1) I like the color 2) I like the way it fits and 3) It wasn't a problem with my ability to take directions or knit well: it was the pattern.
This is very encouraging. Here's a small and badly taken photo from  my cell phone: 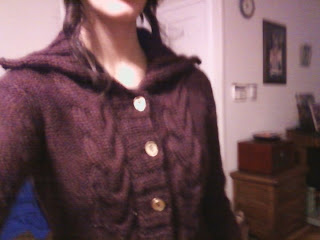 Oh, and guess what I found out? I was hovering around the crafts section of Barne's and Noble, and I spotted a copy of The Knitter's Almanac by Elizabeth Zimmerman. Now, I've taken to reading Knitting Without Tears in wee hours of the night and i thought I might take a peek inside.

In the book I found ( along with the pattern for those charming nethergarments I could never knit in a billion years as much as I want to look like ziggy stardust) a forward by Meg Swanson.

No big surprise there: Mrs Swanson did a forward for Richard Rutt's A History of Hand Knitting and she is, after all, EZ's daughter. No. The big surprise, the "guess what!" was who wrote the introduction, and the fact that I guessed who it was before I got 3 sentences into it. Do I have to say more?

The woman with whom I share my birthday and love of all things wool (except crochet). The knitster I admire so, in fact she's the other knittingauthor I read in the wee hours of the night. Yes, The Yarn Harlot: Stephanie Pearl Mc Phee. That was almost enough to make me fork over the $25 right there. In fact there are only two reasons I didn't. (Well, three, but do I ever care whether I have any money?)
1)$25 is almost #30 and if I'm gonna spend that much I might as well get Margaret Radcliffe's glorious guide to color knitting that I've been coveting.
2)The first section (January) showed a pattern for an insanely complicated aran sweater written not in knitter's abbreviated jargon (which I fully understand and expect) but in Elizabeth Zimmerman rant-speak. I'm pretty sure I couldn't handle that. (The Yarn Harlot herself admits she's only made a few designs from the book- although she admits that this is because EZ teaches that you should modify, adapt and ultimately design your own patterns.)

Okay, really there were four reasons.
3)I don't have money, yada yada yada
4)Stephanie Pearl McPhee has openly mocked the price of new knitting books and I have to agree with her. Not a single book was under $15! This includes soft flimsy 50 page books with just patterns as well as thicker books on technique. I really could find the book cheaper on amazon, no matter how much I want This Edition Right Now.

Did I say four reasons?
5) My collection  of knitting books is fast outgrowing it's shelf and I'm going to have to do something about it. Soon.


Recent Purchases:
-Size 8 29" circulars (for the body of the upcoming slytherin colored raglan sweater i'm going to design myself with the help of Nina's Sweater Class from KnitPicks. Link here)
-Size 8 16" circulars (same sweater. I really should have gotten size 24" and 16" but Michael's sucks and I have no excuses for my lack of resistance to 50% off coupons.)
-Size 11 Straights (for the hardcore sweater from bernat)
- 4 balls of Bernat Roving for the aforementioned sweater although I actually need 8.(Apparently during a big sale at Joann's everybody needed the color "flint.")
- Alice Starmore's Book of Fair Isle Knitting (Which I got at 50% off and which intimidates me greatly since I apparently can't even make a fair isle design when I have patterns and crayons in front of me and all I have to do is color in the little boxes.)


OH! And I actually got up the courage to go to a local knit night! But, there was nobody there. It really sucked because it was in the last phase of my Cable Car Coat and I needed somebody to help me figure out the sleeves. Next saturday I'm trying again I swear!


WIPS:::::
1) Cable Mittens from Patons pamphlet. I know, I know, what the hell am I doing still working on these, shouldn't they have been done a long time ago? Well... yeah. But when I made the first mitten the way the pattern said I didn't end on row 10 and had to knit until the mitten was long enough to warm a horse's nose to get to a row 10. It took me that long to realize that nope, that mitten is not going to fit my hand. So I ripped back several inches and put it on a stitch holder and haven't looked at it since. I'm sure I could figure out how to fix it but frankly I think I'm avoiding the other mitten. Plus I stole the size 6's to do the ribbing on the central park hoodie.

2) Central Park Hoodie. About which I have nothing to say except it's going well and I hope it stays that way.

3) Ravenclaw House Scarf- first year. Which is coming along swimmingly if slowly.


Okay so you know those old-fashioned correspondance courses? I was thinking about doing one on the Tarot last year, but they were $300 and I'm poor and that's ridiculous. Well, anyways, I found one for knitting! And it's, like, totally legit and you get a "Master Knitter's" Pin and everything. I mean, it's The Knitting Guild Association and of course I've heard of them before but I always had a high-ho "who the hell is gonna pay $30 just to be a member of some stupid club and get four magazines" attitude. Which I hereby state I no longer have.
$30 is nothing.
The non-profit I used to work for made you pay $35 to be a member.
And the first level for the master knitting course is only $90? You know how much they charge at Joann's or Michael's for just a one or two hour class? With the Master Knitter course you get personal instruction and crituques, and you have to spend as many hours as necessary to master the material. I think that's worth it. You get a certificate saying you're a Master Knitter once you complete all three courses.
Of course, the second course costs $95 and the third is $100 so you end up paying as much as the Tarot course after all but this is much more useful.

Thinking about being a Master Knitter made me think about my ultimate dream: making money off my knitting. I mean, I've already taught several people how to knit. Maybe I could do that for a little side cash, and if I had to prove my skills to a board of master knitters I'd sure as hell have to learn to seam!

Also I found this cute video from craftyarncouncil.com showing how teaching knitting in school can change the students for the better. It's 16 minutes long and I watched the whole thing only pausing when my computer inexplicably crashed.

Anyways, about that knitting course and me spending money I don't have.The education would be priceless! I really need a course like this! I'm telling this to my wallet, I'm sure. And it's spitting out a sad cough of dust balls and moths.

Besides, starting school soon means $300 for tuition and books. :(

1) Central Park Hoodie (This one is going good: I have the yarn, the needles, the back done and the left front almost done.)
2) Slytherin Colored $5 in Paris Knockoff I plan on designing myself. (I have the Simply Soft, I have the needles, I have the "pattern" from knitpicks.)
3) Hardcore Sweater (I have half the yarn and the needles, but I still need to swatch and see if the yarn will felt)

The List of Things I'm Going to Knit Eventually
4) A beautiful yoked pullover with Paton's in light Gray, darker Gray, soft blues and violets. I plan on designing both the sweater and the fair isle myself, though I have proved insufficient at both of these skills.
5)Girl's Night out Hat and Sweater from The Natural Knitter. I have no idea where I'll get alpaca yarn and I'm pretty sure I won't have the patience for all the cables and that although I won't want any color but pink I'll look terrible in it.
6) Thigh High Footless Tights. I have the yarn and I have some needles but I haven't swatched and I'm not sure how I'm going to get through such a lengthy project. Twice.
7) Another Cupcake Hat. I try to convince myself that getting money for my knitting will be worth all the sprinkles I have to sew into the damn thing. And the pom pom.... I hate pom poms.

I'm thinking about adding something about the master knitter's course. Like take it, or prepare to take it, or save up money pretending like one day I'll have the guts and drive to take it. Meh.


OH! And something kinda funny happened today. You know, I'm one of those knitters with a kinda don't care too much attitude. Whenever I run into gauge trouble I try to stay mellow and say "It'll fit someone." Well once upon a time, in my early knitting years in Cool, I knitted a hat. This hat was so small it would protest and jump from my head when I tried to wear it. It served most of it's sad acrylic life on the head of my Glenn doll from Seed of Chucky. It's a boring black hat with a rolled up garter stitch brim. The saddest thing about it is the wimpy pom pom on top. You know, it's probably this very hat that bred my hatred of pom poms. I made the pom pom out of two miserable pieces of cardboard that weren't exactly circle, and by now it's hanging on by a thread. Anyways I found that hat today. I think it was actually one of my first projects in the round because there's no obvious and horrible seaming like most hats of that era. I found that hat today, remembered my old saying, and put it on my kid's head big fat 8 month old head. 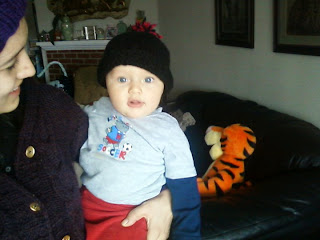 And dammit, it fit.
Posted by grandmastatus at 4:46 PM