Gotta love that bulky yarn! This project was done sooo quickly. I started it on Wednesday July 21st and completed it on Saturday July 24th. It was so great to look forward to my knitting every day while at the office. I was so eager to work on it, I knit on it in my car during my lunch breaks! 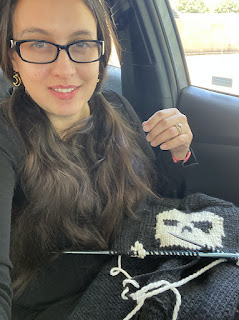 The yarn was Knit Picks Biggo and I used a size 10.5 (6.5 mm) needle just as the pattern called for. The pattern, Skully, was from the first Stitch n Bitch book by Debbie Stoller and the pattern itself was written by Samantha Bliss. I had planned on making 2 modifications: to taper the sleeves and to sew the shoulders together with mattress stitch instead of doing a 3-needle bind off. I ended up making neither of those modifications in the end, but I did change the sleeves to have ribbing instead of garter stitch at the ends.
The fit is actually spot on, which is great because for a moment there I thought the armscye seemed a bit shallow. I thought I was going to have to knit a gusset for the armpit, but luckily when I seamed it to try it on I had no issues.
One thing that didn't turn out the way I had hoped was the neckline. Usually I would have picked up the stitches with a circular needle and knit a ribbed neckband. However, due to the move and all my knitting supplies being in storage, I didn't have a circular needle. Instead, I crocheted a border around the neck and it ends up almost like a boatneck, which I wasn't really hoping for. 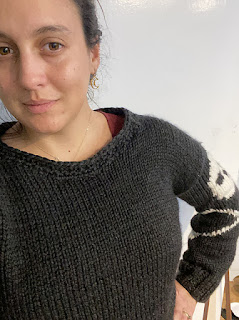 But ultimately it doesn't really bother me and I may not even bother to fix it when I get all my stuff unpacked. I think it looks fine and it certainly fits fine. It's 100% superwash wool so it's certainly very warm, and I can always pair it with a scarf.
So enough said, here is the finished object! 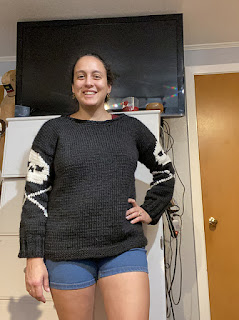 Thank you for tuning in!
I also have been vlogging my adventures on Odysee and you can follow those here.
Happy Knitting!
Posted by grandmastatus at 8:24 AM