Well, now that I have finally finished my sock, (Note: Sock, not socks) I am ready to talk a little bit about the Fish Lips Kiss Heel. Like I mentioned, I had a lot to say about it, and I decided in the end that making a short video would probably be easier as well as less difficult to organize than a blog post. Unfortunately it came out longer than I'd hoped, mostly because I apparently don't shut up.

And I'll show you some pictures:
The completed sock. 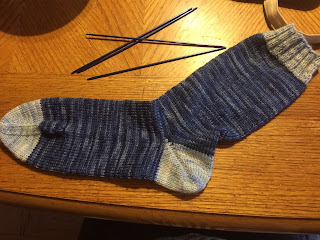 This is the reverse side of the heel, demonstrating the bumpy bit. 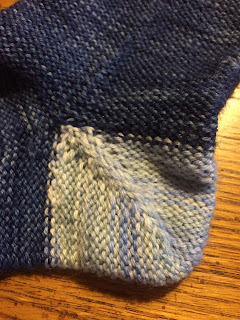 And also completely unrelated, but I also made a cute little baby hat out of this yarn and never posted a picture on the blog. 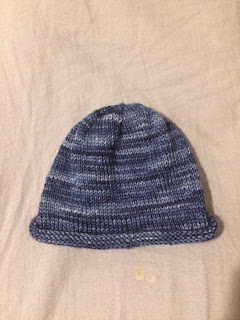 And I guess since now I have turned the subject to hats, I'll share a couple of chunky hats I worked on recently. 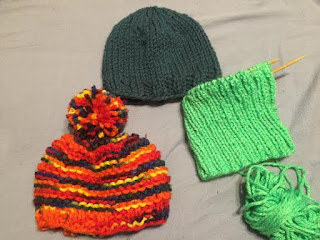 Other than the green one that is on the needles, I'm not really sure what yarn I used for these. I know it is chunky, and I know it is acrylic. No pattern for these three hats. The green is actually Red Heart's "Reflective" style yarn. It's a little itchier than I expected, because the reflective threads feel sort of like tinsel, but my son picked the yarn and requested a hat. I believe the other two are Bernat Softee Chunky, the new kind which has 11 stitches per 4 inches. The old Bernat Softee Chunky was not as heavy and I actually used it to make my very first sweater. I liked the old stuff better. But I made one other hat as well out of the Bernat, which I actually did use a pattern for. 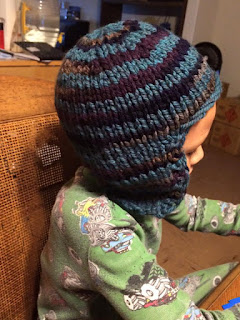 This pattern came off of the ball-band and is available for free. But I don't really recommend knitting it as directed: I converted the flat pattern to work in the round.

I have been finding myself missing having a complex project to work on. Even with school, work, pregnancy and parenting- or perhaps BECAUSE of all that together- I feel like I need something to work on that might challenge and interest me. The baby blanket I was working on was a great project, and I really miss working on it. I think I might take up a sweater, and so I frogged my old Vine Yoke Cardigan (which may have been under the bed for 4 years now in its unfrogged state) and washed and hung the yarn up to get the kinks out. I'm not sure what it will become yet, but it wasn't doing anybody any good sitting under my bed.
Posted by grandmastatus at 11:44 AM