a bit of diversion...

Yesterday I felt like working on something new. The sweater had been progressing pretty steadily (I've started one of the arms and it's perfect for working on while doing homework) but I felt like doing something that requires a bit more concentration.
My son, meanwhile, has been asking me at night to "read" to him from a crochet pattern book called "Easy Crochet Critters". Of course we don't really read anything, we just look at the pictures while he tells me which ones he wants the most, and we decide what color each critter would ideally be. I've been telling him nightly that the reason I can't make any critters is that I don't have any fiberfill, but today I realized I DO have fiberfill that has been hiding in a closet. So, the sweater sat in its bag while the two of us watched The Hobbit trilogy and I worked on some animals for him. 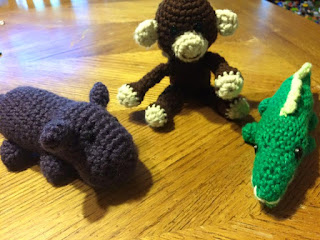 The yarn varies. The alligator is made of Hobby Lobby I Love This Cotton, the monkey is made of Red Heart Super Saver, and the hippo is made with Lion Brand Wool-Ease. If I had to guess I would say each one took 2 to 3 hours total to complete. This morning when I woke up, he had found me some yellow and orange yarn and said that the monkey, alligator, and hippo were "waiting for their friend, the lion." So he's probably next in line.
One thing I really like about being able to crochet as well as knit is that I get the satisfaction of casting on new projects without really feeling like I'm "cheating" on my knitting.
Either way, I still fully expect my sweater to be done within the next few weeks.
Posted by grandmastatus at 1:18 PM