So apparently in July 2013, a new type of sock heel took the knitting world by surprise. I'm referring, of course, to the Fish Lips Kiss Heel. This sock heel has been the topic of much discussion and many people have simply raved about it. Somehow I missed the memo, and have continued along making my heel and gusset socks and then passing them along to my mom when I found that, once again, I don't like the way they fit. I've tried short row heels, I've tried afterthought heels, and I've even made tube socks. But the fact remains: I like me some store-bought socks. I just like the way they fit, and I also don't like socks unless they sit at my ankle. Making ankle socks, I figure, would be a waste of sock yarn and so I just end up making socks for family and friends and that has been fine and dandy for me up until now...
I've been watching the Knitting Expat Podcast and after 24 episodes during which Mina has churned out something like 14 pairs of socks, of which more than half incorporate the Fish Lips Kiss Heel. As a result my curiosity has gotten the best of me. I bought the pattern (even though I feel like selling a HEEL pattern is a little...I don't know. I don't want to say greedy because of course I understand the work that went into developing this heel. But at the same time, every other heel pattern has been passed down for generations and therefore have been free. If it wasn't for the internet this pattern would similarly be passed down. But if it wasn't for the internet I wouldn't have access to it, so I can see it both ways!) and after almost fainting when 16 pages printed out, cast on my newest pair of socks. 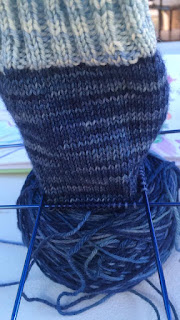 I'm using my favorite sock yarn, Knit One Crochet Too's Crock-O-Dye. I plan on doing a contrasting heel and toe with the lighter color. The reason for that is that I don't have enough of the dark blue to do the complete pair because I used some of it to make a wee hat a few weeks ago. And I don't have enough of the light blue to do the complete pair because, well, once upon a time I knitted a sock. It was a beautiful sock, it was a self-designed pattern with a horseshoe cable down the front, and it was completely done and I just had to knit the second one. Then, second sock syndrome kicked in, and before I was able to overcome it I actually LOST the single sock and this light blue ball of yarn has been sitting in the stash depressed for like two years just waiting for its mate to pop up so I could knit it. Since it still hasn't popped up, I'm going to use the dang yarn and be done with it.
Of course, that means that once I finish these socks, that first sock is going to pop up.
Anyways, these socks are going to be for my mom, because well 1) I love my mom as anyone reading this blog can probably tell because so many of my FOs go to her and 2) she loves handknit socks!! She wears them until they have holes, and I truly appreciate that. I don't think I've knit her any socks since shhhh 2012. (I feel ashamed.)
So that's what I'm working on. The vest is still in its bag, but actually those are the only two works' in progress I have at the moment so I'm pretty happy about that.
Happy Knitting!

Posted by grandmastatus at 2:19 PM