For some reason I knit a lot more in the winter. It doesn't really make sense, because you would think I would knit in preparation for winter, but it tends to always work out that way.

Anyway, last Sunday I cast on for a garter stitch diagonal baby blanket for a co-worker. I worked it up in some Lion Brand Tweed Stripes I had lying around, and it came out very beautiful and ready for gifting on Friday. There were decorative yarn overs placed at the edges, and it was in an orchid purpley pink colorway. Alas, no pictures, but she was very happy with it.
Then on about Thursday I got a ravelry message regarding one of my own patterns, which it turned out contained a mistake. So a quick sample hat was turned out, and the mistake fixed. I DID get a pretty lousy picture of that:

Then I got the hankering to swatch for a sweater, but in the new apartment didn't have anywhere to put my swift!! What did my awesome boyfriend do? Flips the darn coffee table over so I could use it! 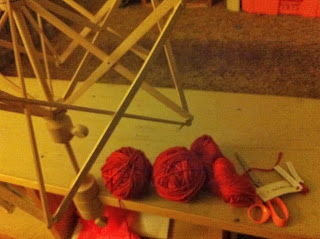 So now I'm working up a swatch in Malabrigo Twist for the Revere House Cardigan that I've been wanting to make since December 2011. I hope it turns out as good as possible! May the knitting gods smile up on me...
Posted by grandmastatus at 6:27 AM