I really, really thought Vyvyan's sweater would be done last night.
But as it turned out, my search for yarn took more time that I'd imagined.
And then, of course, we had to have lunch, and go to the park... at any rate, when I turned in last night the sweater looked like this: 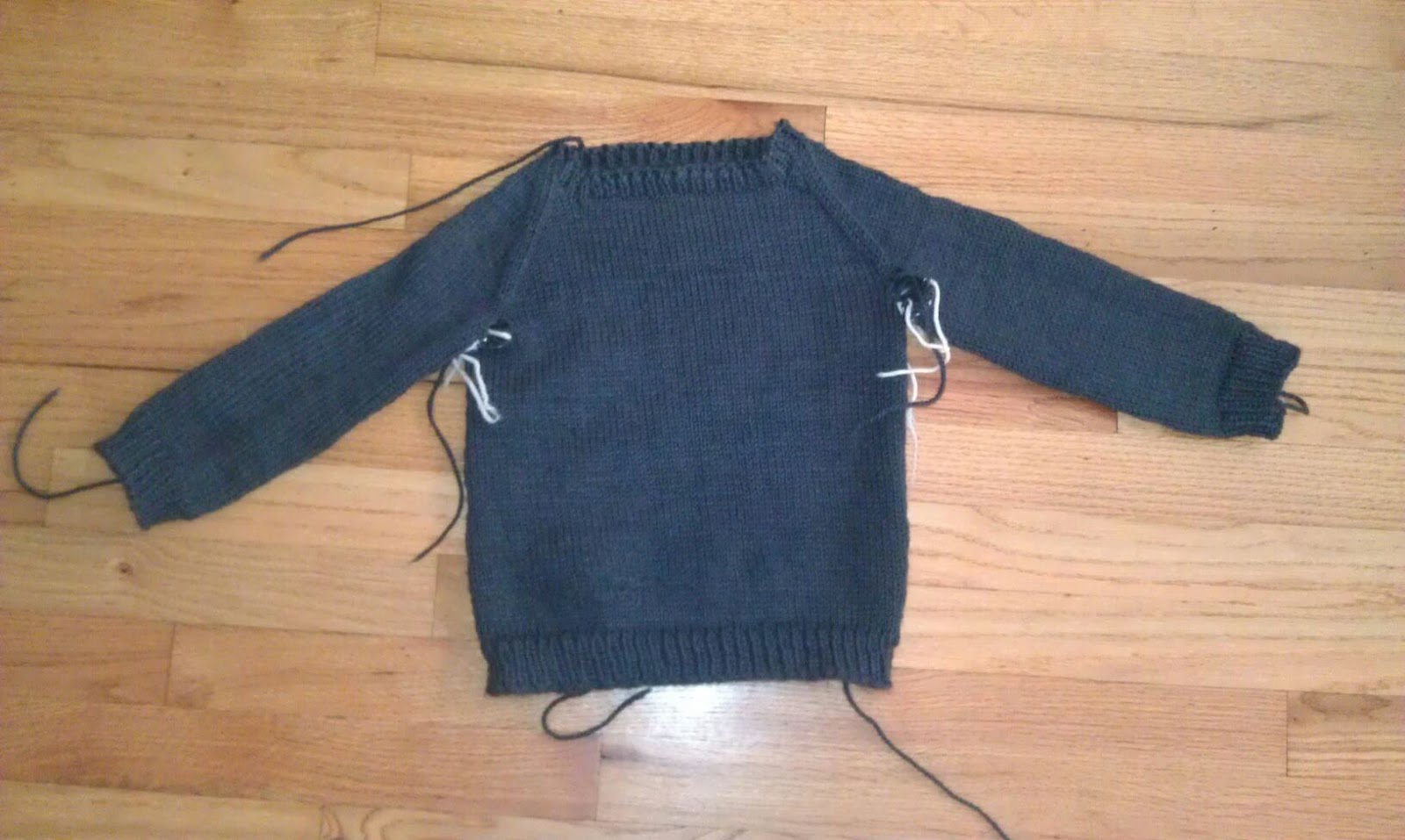 After grafting the underarms and weaving in all the ends I had the boy try it on.

It fits him OK, but I'm disappointed by the neckline. After searching in vain for some kind of alteration for raglan decrease modified for children, I finally followed the EPS as-is. It comes up too much in the front, and kind of sticks out. I was hoping I could fix that with blocking, but next time I think I'll do the ribbing as short rows, too, and keep the bottom of the neckline plain. Maybe just one pick up round, and then just the ribbing at the back. 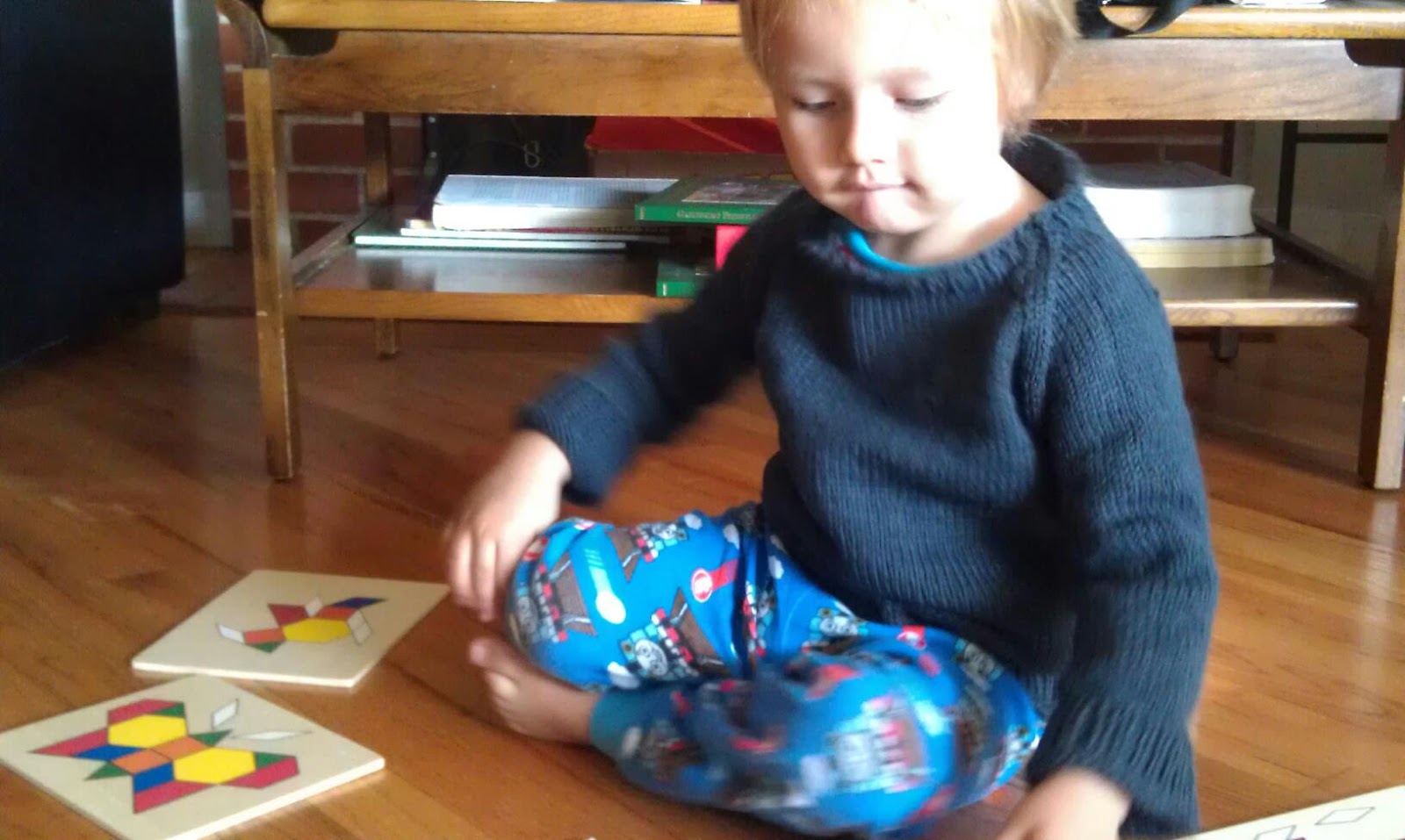 I don't know, but I like the modification I made last time around better. Not that it matters since that sweater is now a glorified piece of felt.

Anyways, after he tried it on (actually he's still trying it on, because I asked him if he wanted to take it off and he said no, thank you.) I fixed up the bit of felt for his new dinosaur. This time he wants a brachiosaurus instead of a T-rex, which makes me happy because I hate doing the same thing twice and the t-rex was a lot harder anyway. (Unrelated note: I have to mention right now that blogger's auto-correct is trying to tell me that brachiosaurus is not a word, and that I should change it to brontosaurus- which is not even a kind of dinosaur. *face palm*)


So I thought I'd share exactly how I did the little guy: all I used was tracing paper, one of Vyvyan's dinosaur books, an 8b graphite pencil and a bit of felt. 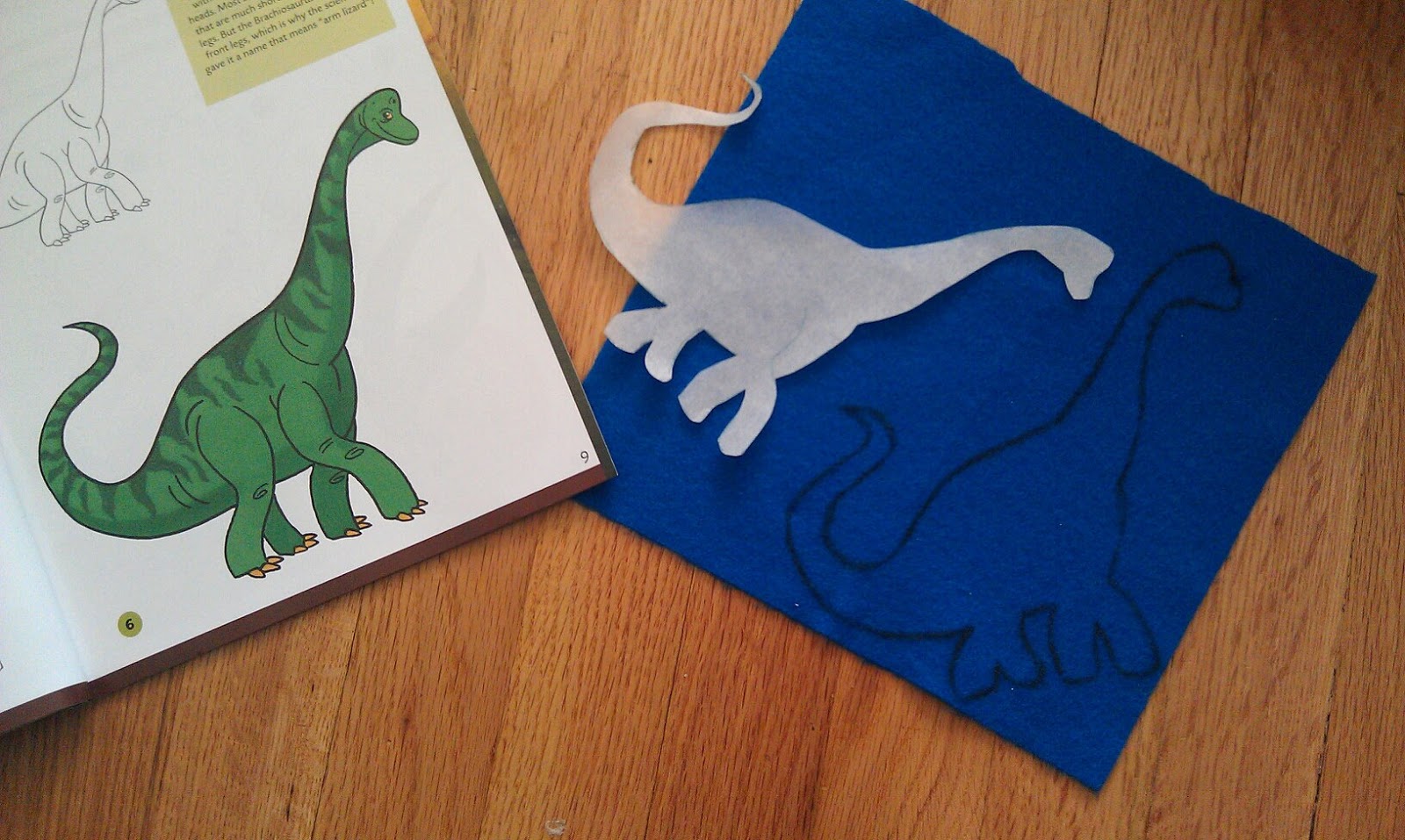 So anyways, what did I buy at the yarn shop? NOT Malabrigo, which was kind of what I was hankering for: apparently neither of the two shops within 30 minutes of my house carry it at all. (They both have an abundance of Cascade yarns, however.) At Knitique I walked out with the best stitch markers ever, and a book I've been meaning to acquire.


After Knitique we putted over to Anna's Yarn Shoppe, which has recently moved so that they are literally .4 miles away from each other. There, I ended up with 2 skeins of Merisoft Space Dyed- a deliciously soft merino I have used once before to make this hat. I'm not sure if it will work for the BFF cowl, because it's not very solid in color I don't know about the stitch definition... But it's snuggly anyways, and I still have 2 shops to search in after all.

I have like 3 more pictures of Vyvyan's sweater but my computer is refusing to acknowledge them, and I suppose that's enough time spent on the computer on my day off anyways.
So!
Happy knitting everyone- hopefully there will be pictures of a 100% done sweater here very very soon. :)
Posted by grandmastatus at 11:28 AM