I realized I've been pretty quiet lately on the blog front.
Fact is, my phone is dead. Completely kaput: the screen is cracked from my son's tantrum in the line at Michael's, the cord input is misaligned causing it to beep erratically about a low battery in spite being plugged in, and I'm just not sure if it's going to make it. I'm probably going to have to buy a whole new phone and the reason I bring this up is because I use my phone to take pictures for the blog.
I have the webcam, but the little camera on my phone is of much higher quality and I really miss having it around. :(
I have finished a few objects I'd love to share, but what's the point of mentioning them if I don't have the means to show them to you!? Then suddenly I remembered I have a camera! I dug around for a while to find the little $30 digital camera I bought myself for my birthday (it was hidden under a pile of make up and mittens in the furthest drawer from my mind) and then I rummaged further still to find the camera cord so I can present to you:
The Magic Treetop Bag! 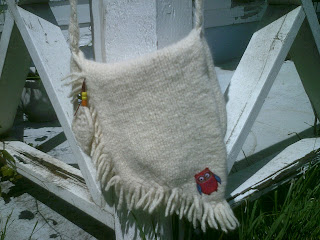 This project was so quick! Seriously, I decided to cast on when my son started to nap. I watched the movie Fantastic Mr. Fox and the bag portion was done. A few hours later and I had the flap and just needed to add fringe, felt and sew! I tried felting by hand first, and the little leaf felted quickly. 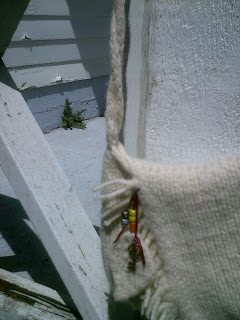 But I found myself annoyed with the felting process (as usual) and just threw it in the dryer.
While searching for a nice button to affix to it, I ran into a little owl patch I bought on a whim. I said hello and asked if he would like to perch on my magic bag. He agreed, and he is keeping a watchful eye. 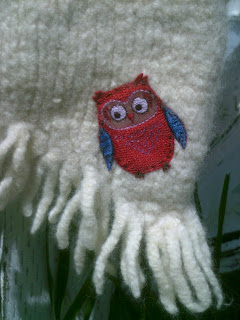 Attached with the leaf is a little key a friend gave me, some beads I bought at a pow wow last year, and a little skull from a bracelet that my son broke. 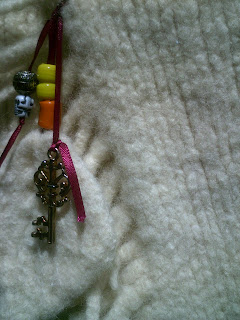 I have a whole baggie full of the yellow and orange beads, and I thought I would add a few more to the fringe (because the fringe reminds me of dreadlocks and I would like to hear the beads click together while I walk) but I would need to use glue to secure them, and I'm not entirely sure where I could find some in my house right now...
I am henceforth on the lookout for a good button to put in the middle as well, but for now this project is DONE!
I have a few other FO's to snap pictures of, so you can expect to hear from me again soon. ^_^
I still miss my phone camera, though...

Posted by grandmastatus at 3:05 PM