Exactly how much yarn does Cecilia have?


And I had a picture of the (beautiful) sock yarn, but i have been trying to upload it for more than an hour and I've given up on it. 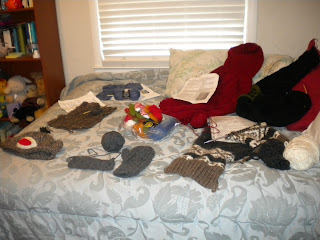 In this pile there are 3 sweaters in progress, a pair of socks, a hat, a pair of mittens, a mitten garland and a scarf. Not so bad, I don't think. I'm doing far better than I'd been imagining. Unless I left some things in the closet... I'm not entirely sure because it was hard enough gathering this much with the fatboy on my hip.
Anyways...
I've been invited to table at the Steelhead Salmon Festival on May 1, and I haven't yet decided whether I should or not. It costs $25 dollars for a table, and I severely doubt I have $25 worth of merchandise. I'm trying to design a knitted fish anyways, just in case. I thought it would be kind of a cute little keychain type thing: a little knitted fishy from the salmon festival. Seemed cute to me, I don't know. I"m having difficulties with the designing because I'm using DPNs and I'm not very good at planning the increases.
Also, those socks I started? 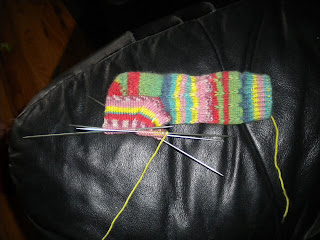 This is how much of it I had when I decided they weren't working out and had Lauryn frog them. I took a picture of that, too, but I already went over the whole blogspot not wanting to upload things for me today.

So that is the yarn I'm now using for the fish design #1
Which so far goes something like this:
CO 8 st over 3dpns
*k1, inc1* 1 round
1 round plain
*inc in each stitch* 1 rnd
1 rnd plain
inc only at the first and last of needle one and on the first of needle 2 and last of needle 3 (like a sock)
1 rnd plain
and continue this until your fish's head looks big enough
This is where I currently am.
the rest of my pattern goes like this:
knit straight a while, maybe an inch.
decrease SHARPLY for the butt end
PU st at top and sides for fins
and I kinda don't know where to go from there.

Fish design #2 is going to be a lot like my purse "Harrison" and "Paco."
Basically that means I'll knit a shape of a fish twice and then seam it up. This one would need some embroidery and I think the inca sportlace. Paco lives inside of harrison and I think a knitted counterpart would be too much work. Then I'd put an I-Cord inside harrison #2's mouth and give him a little drawstring type thing. This would be rad, but I doubt it's going to happen.


I might not do the Steelhead thing at all. It depends on the cuteness of Fish Design #1, which I'll post immediately upon completion.
﻿﻿﻿ <><>
<>
<><>
So randomly it decided I'm allowed to put up my pictures. Also, I put a video of Lauryn ripping out the sock. She was really excited about it, not that you can tell. And the reason the camera goes all wonky at the end is because my kid demands my attention﻿﻿﻿. Also, it put the video up twice. I did that on purpose. So you can watch it twice. Because it's that important.
Posted by grandmastatus at 7:05 PM