I'm Back from Vacation!

I had such a good time going camping. I packed no less than seven projects to work on.
1) the Orchid and Fairy Lights hat, which I completed on the way to the campsite
2) my Akiko cardigan
3) my Plum Blossom Tee, which I haven't cast on yet
4) some acrylic yarn to teach my 8 year old niece to crochet with
5) some socks
6) a shawl
7) a slipper project

So... I had a lot less knitting time than I had anticipated. We spend a lot of the time at the lake, swimming. So the only thing I actually finished was the Orchid and Fairy Lights hat which, surprisingly, fit my niece perfectly and I might end up giving it to her for Christmas. The color just looks so good on her, and the slouch is just right. I didn't get a photo of that project because I have been absolutely obsessed with my most recent project: 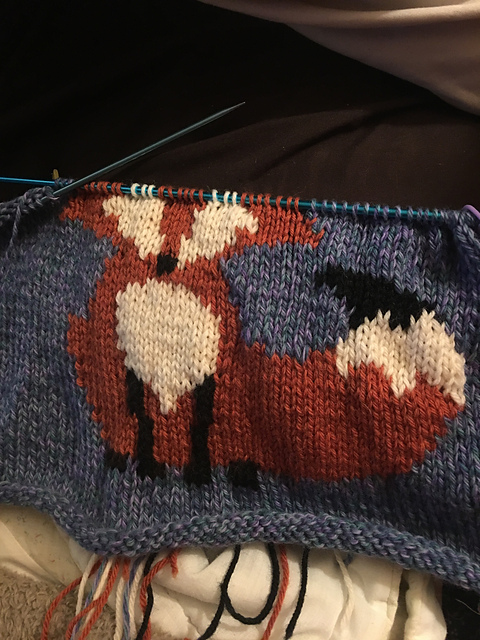 I'm using the Cascade Quatro I found at the thrift shop last December, as well as some scrap worsted yarn to make an oversized, drop shoulder sweater with a fox on it. Why? Why NOT I ask you?

Well, actually there was a legitimate reason why I chose to do intarsia for this project. The yarn was from the thrift store and was already wound. There were 5 balls, which would be 1100 yards which would be just enough for me to squeak out a 42" pullover. However, I don't know if the yarn's previous owner used some of the yarn. They SEEMED like full skeins, but out of cautiousness I decided to put something on the sweater. At first I thought maybe I would knit some giant lips on it, think Rocky Horror Picture Show. I also considered a big pair of cat-eye glasses, but that wouldn't really take up enough space. I really, truly wanted to knit a big fat cheeseburger on the sweater too. But I unfortunately don't have any proper cheeseburger colors in stash, and for something like that you really need accuracy. And it's my year of Cold Sheep, so I can't buy any yarn. I looked in the stash and found my old Camelino in this perfect orangey color and thought I might knit a fox.

I found a different chart first, with two adorable foxes snuggled up together. Unfortunately I was unable to make that chart work. So I have this lonely fox instead. I do wish I had added in some cat-eye glasses for it to wear!

And yes my fox is missing its eyes. I'll duplicate stitch them in later. This project is going to be for the colors of fall 2018 knitalong. I cannot wait to finish it. Seriously. Even though it is definitely deliberately going to be super dorky. I'm excited.

I'm going to go binge watch netflix and knit now. Hope you get a chance to do the same! (ps it is 105 degrees F in my town right now, and I'm knitting a wool sweater. That's dedication to the craft!!)
Posted by grandmastatus at 7:33 PM