FO; Iced Cardigan and a few others

Although I finished my Iced Cardigan quite a while ago now, I haven't posted pictures because it's been packed away in a Christmas present. It is made for my mom, who is much smaller than me so I haven't been able to get her to model it yet, since it's a surprise. And me trying it on doesn't really do it justice. So the photos will just have to be of it laid out on the kitchen table. 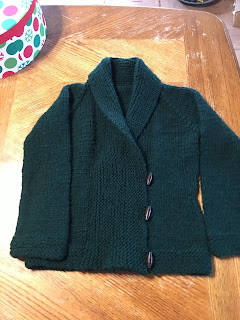 Funny story about those toggle buttons. I actually took them off of my old Central Park Hoodie! When I knitted the Central Park Hoodie about 6 years ago, I fully intended to sew in a zipper but then never did. Then after a few years of struggling to hold the thing closed in winter, I broke down and sewed these toggles on and did some crochet loops to keep it closed. That didn't work very well either, because I sewed the toggles in the very center of the buttonband which led it to gape in an ugly way. My solution was then to use safety pins to close the gaps and then pull it on and off like a pullover. Well, this year that all changed! I sucked it up, pinned a zipper in, and backstitched it in place. The Central Park Hoodie is now the most wearable cardigan I have! I just need to add those pockets that have been in my queue for ages... At any rate the toggles are now split between this Iced Cardigan and my daugher's Tomten Jacket! 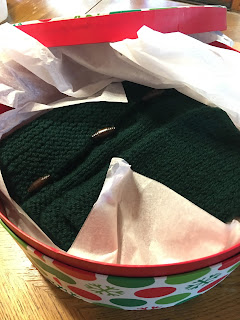 Now this cardigan is awaiting Christmas morning, when I'll get a photo of my mom modeling it. I hope she adores it! It's in her most-worn color, it's washable, and most importantly it will be super warm. She has been hinting at getting a sweater for a while.

So there's been a lot since I've last posted here. I've been hanging out on Instagram these days (@dontdroolonthewool) so I feel like all the good pictures have gone to Instagram! Still I'd like to share a few of my recent FOs:


1) a hat on halloween out of Ella Rae wool, just a plain heathered orange beanie. It's getting a lot of wear not just because it's cute but also because its warm. 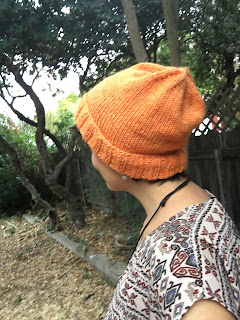 What I love about this hat is that it was the perfect use of this yarn I've had in my stash for several years. I was really feeling excited about orange this year- in fact I talked about it so much my husband bought me 10 balls of Red Heart Soft in colorway "Tangerine." I cast on for this hat on Halloween morning and worked on it during my son's school parade and during trick or treating (in fact the decreases aren't completely even on top because I was trying to chase a two year old on a candy mission) so it's just chock full of Halloween memories too. So I think it's going to be a popular hat for me this year.

2) I made my daugher a little sweater 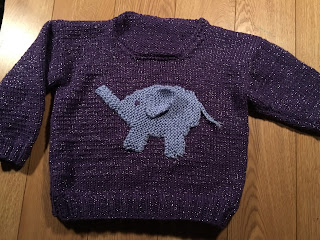 Making this project was... UGH! For one thing, I decided to knit her a sweater completely on a whim. I don't know why sometimes I think knitting is the fastest thing in the world and I think I'll cast on and bind off for a sweater in one day. "She's small!" I think. Yeah, right. So, I found a pattern in a magazine, and I found some yarn in my stash that someone gave me. The pattern was this cabled cardigan that I have always liked since I bought the issue in 2010.
I think, "I'm saving money! I'm getting a pattern I've already owned and using yarn I was gifted! I was going to buy her a sweater and now I don't have to!" Well the first thing that happened was I couldn't get gauge for the pattern. I think it wanted you to use worsted weight yarn and size 7 or 8s and get a 22 stitch/4" gauge. Not happening. With 5's I usually get 20 stitches/4" with worsted, but with this particular yarn (Hobby Lobby I love this yarn sparkle) I got 16 stitches per 4" with a size 5. And of course I was camping and this was the only project I brought.
I frogged the sleeve I started on, and decided to look up a sweater pattern on ravelry with the gauge I was getting. I settled on this shawl collared cardigan even though the original pattern I wanted had set in sleeves and this one was drop shouldered. I knit the first sleeve without incident. I knit the back without incident. It was time to start the second skein of yarn. The second skein of yarn which, after knitting the second sleeve, I noticed was a different dye lot! The color was off, the texture was off,  the GAUGE was off! Frogged the second sleeve and had to wait to get home from camping to start the next sleeve because I had left the third (partially knitted up) ball of yarn. I hated this sweater by then. I didn't even want to look at it.
By the time it was time to knit the front, the thought of making two fronts and then having to pick up and knit a buttonband was so frustrating that I made it a pullover instead. Then, as you can see in the above photo, I used a crochet hook to pick up the collar- just a few rounds of single crochet. (I didn't have the correct size circular or dpns on me when I was doing the collar so I made do with what was in my purse.) The neckline, of course, sagged and looked awful on my toddler and I hated the sweater even more because I knew I would have to correct it. So... I undid it and picked up for k2p2 instead.
The knitting tension was uneven. The sweater was oversize. The yarn was ugly. I sat there and stared at my plain sparkly pullover that was originally intended to be a cabled sparkly cardigan and I hated it and hated it some more. Some applique, I decided, would help it become a loved object. I found this elephant applique pattern (which was a joy to knit!) and whipstitched it on.
She likes the elephant. It fits her much better than the Tomten jacket which is at least 3 sizes too big for her. It's sparkly. It was pretty fast. So all in all, it's an OK finished object.

3. As I previously mentioned I did add the toggles to her Tomten making that another F.O. I also sewed the lining in with the help of my sewing machine and some wax paper. That went smoother than I'd expected.
I have nothing further to comment on that one except that I realize it is way way way way WAY too big. 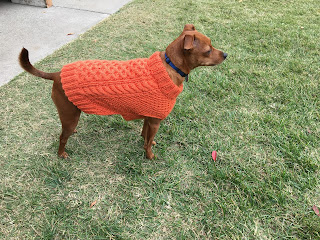 This project was made with some of the aforementioned Red Heart Soft my husband gave me. The pattern is cabled dog sweater and I mostly followed it. My dog has a really big chest for some reason and the reason I don't just buy him a sweater is that all of the Small dog sweaters are too tight and all the Medium dog sweaters are too long. So what I did was cast on for a medium and knit to the small length. The neckline as it turned out ended up being too wide, so I redid it decreasing the number of stitches by about a third. Then I doubled the collar over and stitched it down so it wouldn't flip up and irritate his ears. He's been living in it. I think it looks so nice! I'm really happy with this project. Knitting it was fun, too, and only took two days. Perfection!

5. I started a beautiful new cardigan for myself. 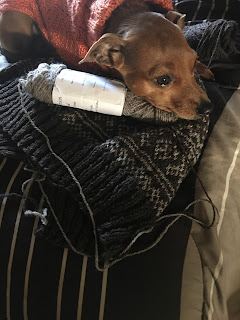 Again using stash yarn (this stuff was on sale in 2011 and I bought thirty!! skeins) I got the inspiration from this lovely pattern whose name I can't pronounce which is $6.50. Since I'm not able to spend money on crafty things at the moment, I decided to just reproduce it in my own way. Which is fine since I got a different gauge than the pattern anyhow. I LOVE this project. I can't even express how much I love it. 1) it makes me feel clever when I can do a project without the pattern 2) Norwegian patterns make me giddy anyway 3) wool wool wool wool wool 4) my first adult fingering weight sweater??! 5) The colors! 6) the finished cardigan is going to be sooo wearable 7) steeking 8)I'm going to choose lovely buttons for it. Those are just a few of the many reasons this is a fantastic project.

6. I decided to make mittens for everybody in my family. My husband LOVES going to the snow, and it's almost that time. So I started with mittens for the baby. 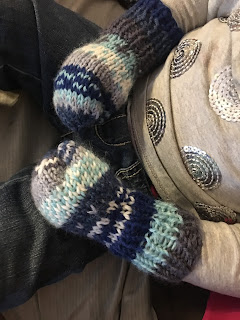 The color patterns are deliberately mismatched, which I love. But the thumbs are unintentionally mismatched (I did the incorrect number of gusset increases for one) which I do not love. I'll be re-doing hers, but in the meantime I finished one for my son, and have chosen the colors for my own. 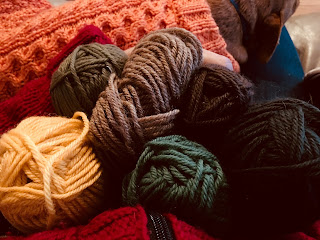 So fall! So squishy! (also you can see Archie wearing his sweater and that I'm wearing my Central Park Hoodie with its recently acquired zipper) My husband, of course, wants plain gray or black mittens so those will be quite boring.

I think that's it!

My goodness! This ended up being such a long post! You'll have to forgive me. I've been unable to post because of laptop issues. I hope to share more soon!
Happy Knitting
Posted by grandmastatus at 12:47 PM