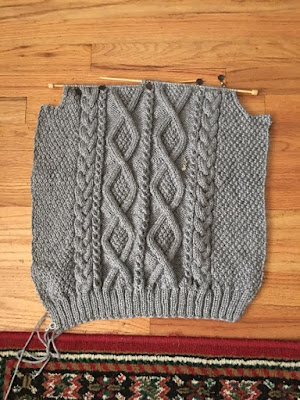 WHAT?! I've actually pulled my Must Have Cardigan out of it's lonely corner hiding spot and begun to work on it again? Believe it or now, when you actually work on projects you begin to see progress being made. It's amazing, I know. My little progress keeper (right hand diamond, second cross down) shows where it was when I set it aside in January. Everything from there was knitted in 2 days' time between work and school and what have you.
So, it's nice to see that progress CAN be made, even on such a drab and dull and boring project as this.

I've started the second stocking project, and finished my mom's socks, although I don't apparently have any photographic evidence. So that makes 3 of my March goals down only 8 days in! I have also cast on for my KAL socks, and am making decent progress during lectures at school. Although, man! There are some speedy gonzaleses in my knitting group. One gal is done with one pair already! 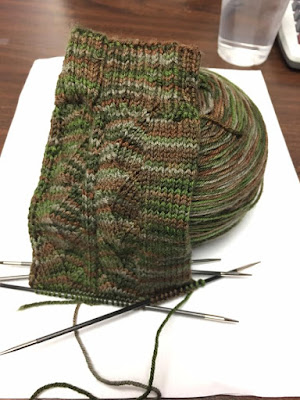 I was quite proud of my partial sock until I saw that!
I haven't touched Penelope's tomten, but I have begun to run again in the mornings so I feel like that's pretty good news.

Everything else is going fine. My life is just... keeping on in the same old way. I'm beginning to feel hopeful that one day I won't be quite so broke and hopeless. Hoping that the future brings less hopelessness... that's odd isn't it?
Posted by grandmastatus at 11:15 PM