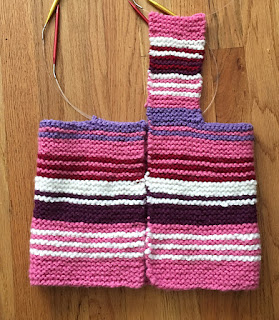 I've been knitting a lot of garter stitch.
I bought the pink and white yarn for this Tomten Jacket in Colorado in October. It was meant all along to be a tomten jacket, but I had forgotten how much yardage garter stitch eats up. After the third white stripe I realized that there was no way the yarn I had would cut it. I was using Plymouth Encore, which is a 75% acrylic 25% wool blend so I dug through the stash and found some spare partial skeins of wool-ease, which is a similar fiber composition. The dark purple and red are wool-ease. But as I continued and thought about the hood and the sleeves I decided to add some of the light purple too, of which there is plenty in the stash. It is 100% acrylic and matches ok texture-wise.
I never sat and thought "hmm, why is this baby cardigan taking so much damn yarn?"
If I had, I might have realized it's a behemoth of a thing. 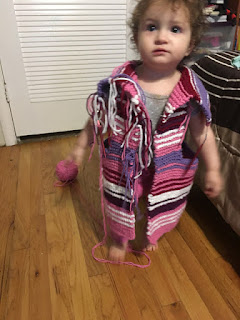 (I had to bribe the kid with chocolate for this photo and even though all the ends are woven in now and the hood is complete, I'm not going to try for a better photo until the sleeves are done.)

As you can see, it is HUGE. Like, hilariously large. Like, it fits my 5-year-old niece and it's made for my 1-year-old daughter. To be fair, I'm making it in advance of Christmas next year for her. So she has a lot of growing to do, and since it's garter stitch it should fit for basically ever.

And it sure means I've knit up a lot of yardage! Three full skeins of encore plus about 1.5 skeins wool-ease, plus one skein of the acrylic probably adds up to about 900 yards so far. That's not even counting the sleeves! (must add here that the yarn is held double)

On a side note, I have decided to skip Stitches this year because of a few hiccups in life. Namely, my husband is currently unemployed and I just don't have the extra $$ to be throwing down on yarn. Secondly, I still haven't knit the yarn I bought last year at Stitches and I don't feel right getting more until I at least knit up the cashmere. And third, I'd really like to actually attend classes at stitches and not just the market. Finally, we bought a trailer and might be living in it temporarily some time in the next year and I would really need to downsize the stash in order to make that do-able, not upsize.

In other news, my town may be evacuating due flooding soon. The next town over has been affected but so far our levees are holding up ok.

Posted by grandmastatus at 9:32 AM