I've had this pattern, Baby Tiered Coat and Jacket in my queue forever, yet after 7 new nieces I still never bought the pattern. Now that I'm 33 weeks pregnant and finally purchased the pattern and started working on it. The pattern is simple, the design is adorable, and I am almost mad at myself for not buying it earlier and making one for each of those nieces. The only thing keeping me from feeling mad is the fact that 100% of those nieces were born in summer.
So I bought the yarn at an adorable LYS in San Mateo, CA on October 10th. 3 skeins Cascade 128 superwash, knowing that since I'm making the smallest size (0-3 months) I will very likely only need 2, but getting that extra ball as insurance. Wound the wool on October 11th and then finally cast on for the neck on October 12th. I knit the collar through separating for the underarms in one go as my husband napped nearby. 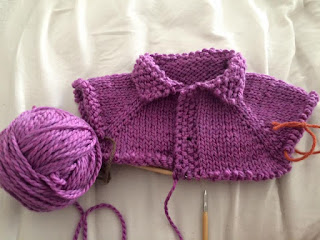 I got tired of sitting, and took a 30 minute walk. When I got back my husband had woken and we decided to watch a movie.
During the movie (Tremors 5, which has a 99 minute run-time and was totally worth it) I almost completed the body. 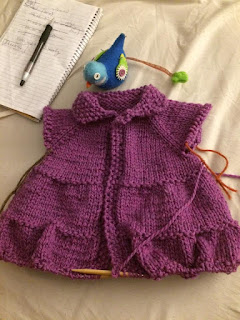 At which point I put it aside and went to sleep.
Today was busy- on the go for most of the day and when I finally was able to sit down and would have had ample time to knit, my hands and feet were swollen and it was all I could do to just sit on the couch with my legs elevated. I did manage to knit one sleeve and after that I weaved in all of the loose ends that had added up, which means I'll only have two ends to weave in later. 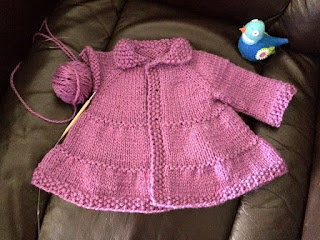 That small ball of yarn in the corner is all that is left of the second skein so rather than deal with an extra set of ends to weave in I just wound up the third ball and will knit the second sleeve with that. I plan on using the leftovers to make a little matching hat and maybe little booties too if I can find a good pattern for it. I swear that if I wasn't pregnant, I would have had this done already! But then again if I wasn't pregnant, I wouldn't be knitting this to begin with...
In other news, I have an ultrasound on Thursday, during which I really hope they don't tell me they were wrong about the gender. Because this little coat is too freaking cute for me to find out I'm having another boy after all!
Oh well. I still need to find some buttons, too.
Posted by grandmastatus at 8:22 PM