When I took my knitting off its circular and it revealed to me that it had been hiding at least 7 extra inches of fabric in its folds, I panicked.

I went through the stages of grief, you know.

Denial: I knew my gauge had changed for at least 4 inches but kept going, assuring myself that "Randy has a larger tummy, he can use the wiggle room" even though I took my measurements with things like that in mind. I kept thinking, "It's not too big, it's fine!"

Anger: All that time and effort for what?! For nothing! Now I have to rip it out, and I bet Randy won't even care!

Bargaining: I bargained with the tape measure. I thought, "Maybe I can just keep going and then I can sew up the sides and just cut off the excess! People do that sometimes! Or maybe I can make larger meals and fatten Randy up by the time it's done it will fit him great!"

Depression: The loss of all that time (all that ribbing done on size four needles) and I can't even just rip back to the ribbing because I have to re-cast on with at least 22 stitches fewer... I held the lost sweater in my arms like it was a dead thing. Could this be part of the sweater curse? Was our relationship doomed to be as ill-fitting as this monstrosity?

Acceptance: I didn't want to stop knitting- I had grown to love the color and the simplicity of the stitch pattern. I switched to k2p2, the same stitch I had begun with. Knit until the ball was nearly gone, cast off, and accepted the truth: I had not knit a sweater at all, but a cowl. 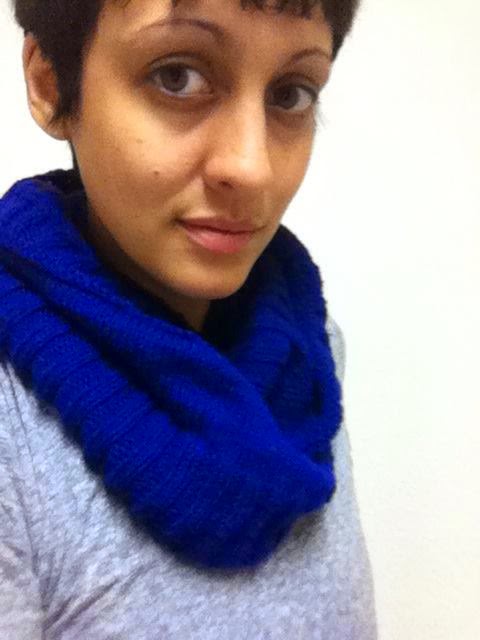 What's great is that immediately after I finished binding off I sent this picture to Randy. His response, "What the f***! I was excited you were making me something!" So he DID care.

I have cast on again, of course. Back to the k2p2- I have a good feeling this time.

Posted by grandmastatus at 9:23 AM