So I bought the workbook Fearless Knitting a while back. I got it dirt cheap, used on Amazon, and was looking forward to knitting my way through it. Of course, it started with the knits and purls chapter and the very first swatch was a very boring ribbing sampler. Well I hate ribbing and I already know how to tell my knits and purls apart from eachother and so I put the book away and decided to trash the whole idea.

But the more I thought about it, the more I realized that I didn't buy the book to learn to do knit and purl patterns. I didn't buy it to learn how to knit cables, or work increases and decreases. I bought it for the chapter on lace, so darn it I was going to skip the first few sections and start working on those lace swatches! 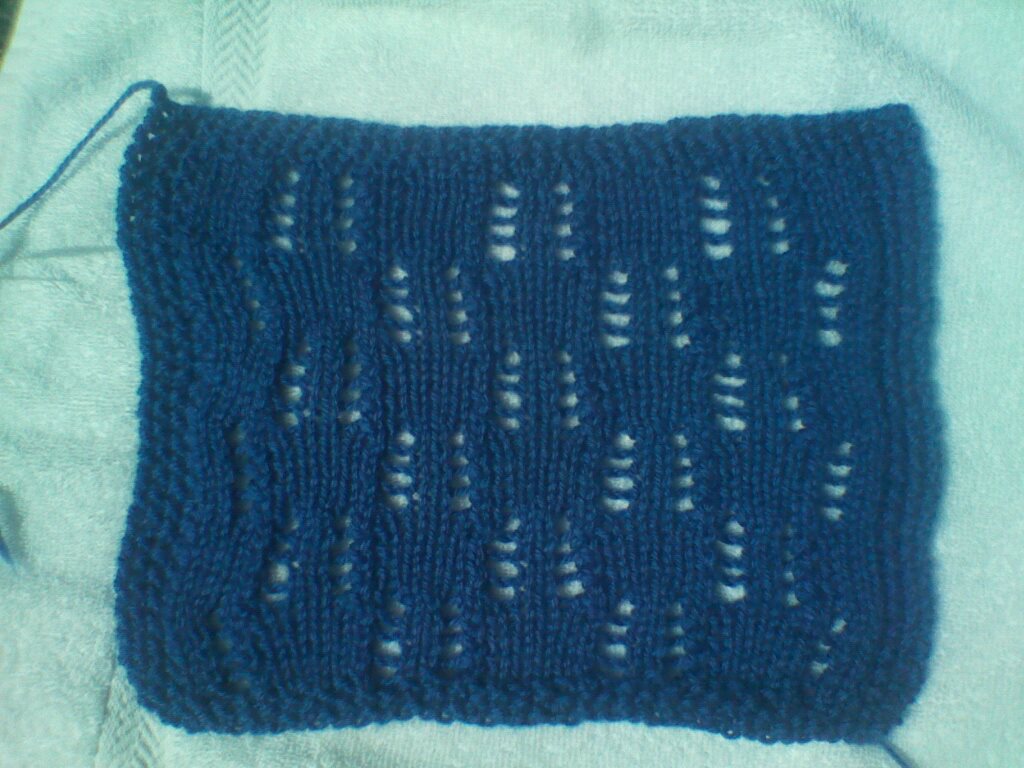 This square was quite easy; I thought it went on too long, actually. I got the hang of the pattern repeats immediately (there were only 2 tier patterns, which were basically the same thing but offset from each other.) but it was good experience for reading both the chart, and the knitting itself. I rarely use charts, and it was refreshing to see how easy it was to read. If I ever got lost I could just count the holes and figure out where I was. 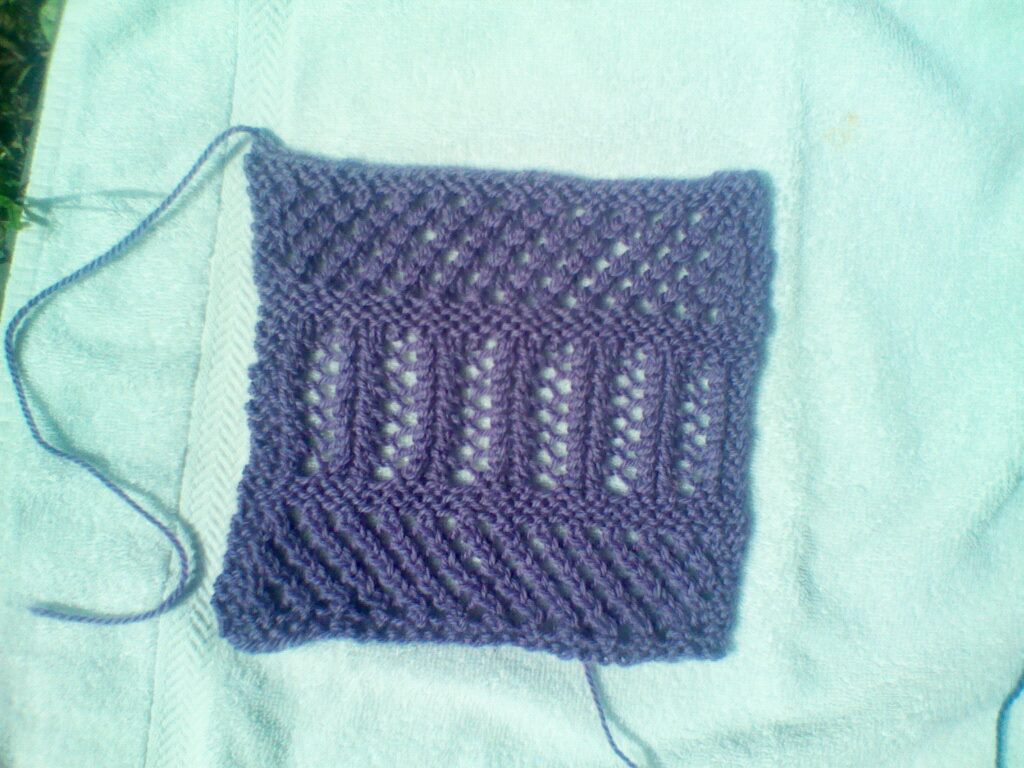 This swatch was the toughest one of the three for me. The bottom third is uses a combination of SSKs and YOs to create a bias to the left, the middle uses a balanced fagotting technique, and the top uses K2togs and YOs to create a right slant. For some reason the bottom was easier for me to do than the top. The middle was very simple because it was just a 2 row repeat. I think what happened with the top was that I kept losing stitches. I frogged it twice actually, before I started really paying attention to find out what my problem was. Now that I look back on the first pattern, which was remarkably similar, and compare it with the third I see what went wrong. The first chart always had you end on a decrease. So you would do your last decrease and then either knit 1 and do your border or just do your border. So I was trying to do the same thing with the top chart. Unfortunately, the top chart asks that you end on a YO instead of on a decrease. So my brain would repeat like this, "yo, k2tog, yo, k2tog, yo, k2tog" regardless of where I started I wanted to end on a k2tog. Then I'd get to the end of the row, do my k2tog and then knit 1 or do my border. When I SHOULD have added one last YO. So then I kept on knitting on fewer and fewer stitches until I finally looked down and was like WHAT? A triangle?
So that was a good learning experience, and once I realized that was my issue I knitted it with no further problems. 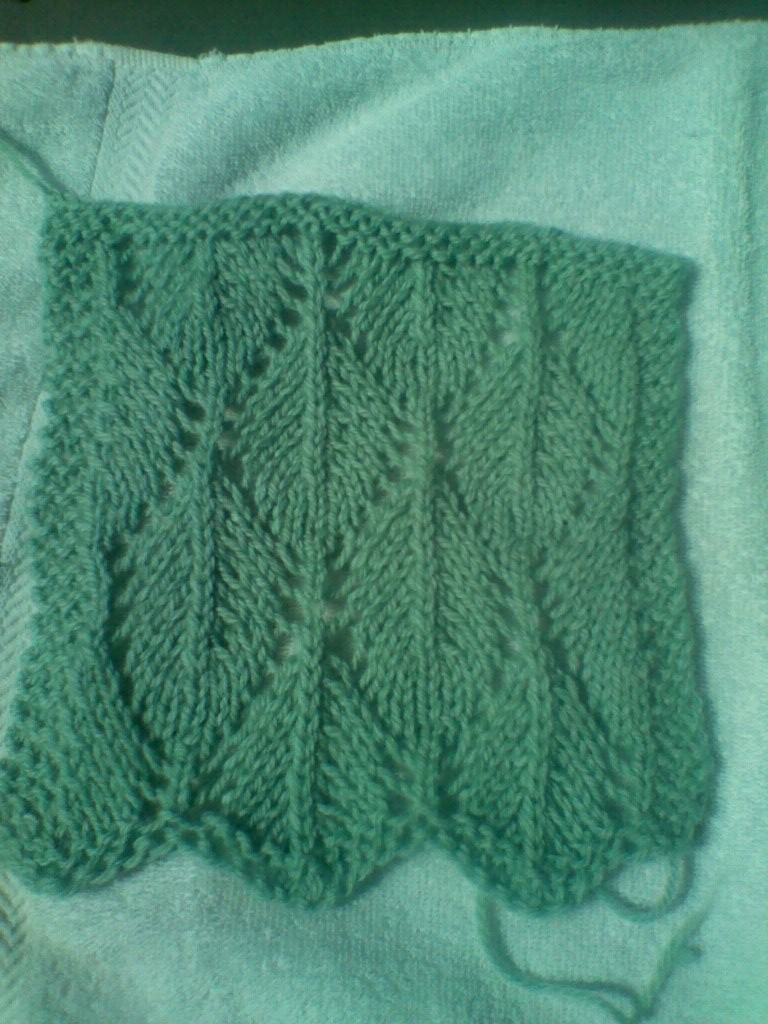 This is my favorite square both to look at and to knit. Because the shapes are so obvious and the brain can see a leaf, your yo's and decreases are almost instinctive. Mistakes are glaring and fixing them is just a matter of envisioning a leaf. Also, though I used the same brand of yarn and size needles for all 3 squares, this one is much drapier and softer than the others.

I used Patons Classic Wool scraps for each of these squares, and size US 6 needles.

On the whole, I think this books is a nice addition to my collection. It is a little exhausting in it's explaining of each and every step, and like I said some of the earlier swatches are really better suited to beginners, but I do like it and I might work backwards towards doing some of the cable swatches as well.

Anyways, happy knitting! I hope all my readers aren't missing me too much- I've been quite busy and my only camera is on my new (less technical) phone so I have been hesitating to post.

Posted by grandmastatus at 12:01 PM