WIP Wednesday: Everyone is fond of owls.

So I realized I have been crocheting a lot. Fellow Ravelers noticed, saying "you've caught the crochet bug!" My ex-boyfriend, after I noted aloud how much he's changed, laughed "I've changed!?" And he pointed at my crocheted slippers.

Something had to be done: I decided it was time to cast on something new.

Perhaps the reason for my stagnancy with knitting was not because crochet was too clever, too quick and too fun but because my current knitting projects were not clever enough, not quick enough: boring.

So I decided on something small, cute, easy and fast: a hat. I wanted to use the charts from these fingerless gloves, so I did some simple math and cast on. 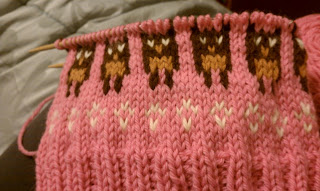 Then I knit and knit for a while, and felt very happy about my bubblegum pink yarn. I thought about how much I would love my hat when it was done, then I watched a very engaging episode of Star Trek while I did the charts, and then....
Well...
It was probably about at that point where I realized my colorwork was a bit tight.
And I thought to myself, "Cascade 220 always blocks out nice and big; It will be fine."

And I kept on going. Yep. I kept going along and I did the decreases and I closed the hat and swished it in water and I waited.

I'm sure you can guess what happens next. The dumb hat is far too tight in the band of colorwork and in spite of it being very cute it Simply Does Not Fit.
The tightness in the middle plus the extra-floppy ribbing at the bottom made for a very strange fit,  so my WIP for today is FIX THE HAT!!! 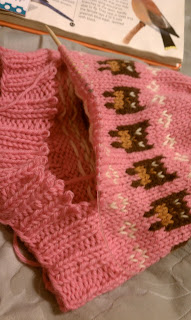 I am lazy: I'm going with option 2. (The only thing preventing me from choosing option 1 is lack of toddlers who abide wool in my life- also I really want to wear this hat.) 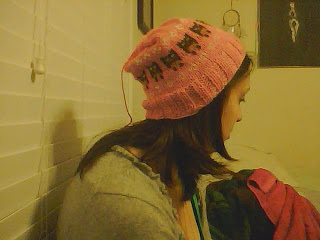 I figure if I could add some length in between the colorwork and the ribbing, the owls will no longer be squeezing my brains. The less brain-squeezing the better.  And then I'm hoping if I add a giant, floppy pom-pom it will look like the slouchy thing was totally on purpose.
...
Or something.


Anyways, check out more WIPS at Tami's Amis.
Posted by grandmastatus at 10:59 PM